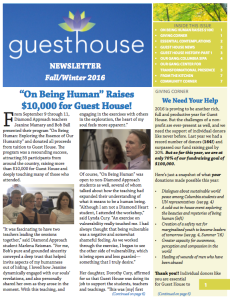 “Between 1,000 and 2,000 years before Guest House was established, this area of Connecticut was populated by Paleo-Indians. The indigenous people of south central Connecticut, the Wangunk, who were of Eastern Algonquin descent, respected and revered the land, calling the area Pattaconk and venerating Manitou, the Great Spirit found in all living things and in the forces of nature. The Wangunk cultivated vegetables such as corn, beans and squash, as well as wild rice (which still grows today along the banks of the Connecticut River). They hunted game and wild fowl, fished the rivers, lakes and streams. And they traded maple syrup, sugar and furs. Their form of currency was Wampum beads made from the shells of quahog clams and whelk.

The arrival of Europeans in 1614—specifically the merchant Adriaen Block, who conducted an exploratory journey for the Dutch West India Company—unfortunately set what is by now a familiar colonialist cycle in motion: the introduction of diseases such as smallpox…”