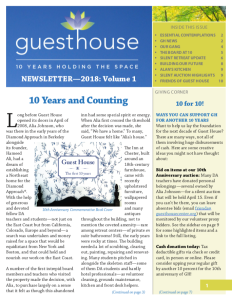 “Long before Guest House opened its doors in April of 2008, Alia Johnson, who was there in the early years of the Diamond Approach in Berkeley alongside its founder, Hameed Ali, had a dream of establishing a Northeast home for the Diamond Approach®. With the help of generous and devoted fellow DA teachers and students—not just on the East Coast but from California, Colorado, Europe and beyond—a search was undertaken and money raised for a space that would be equidistant from New York and Boston, and that could hold and nourish our work on the East Coast.

A number of the first intrepid board members and teachers who visited the property made the decision, with Alia, to purchase largely on a sense that it felt as though this abandoned inn had some special spirit or energy. When Alia first crossed the threshold after the decision was made, she said, “We have a home.” To many, Guest House felt like “Alia’s house.” …”